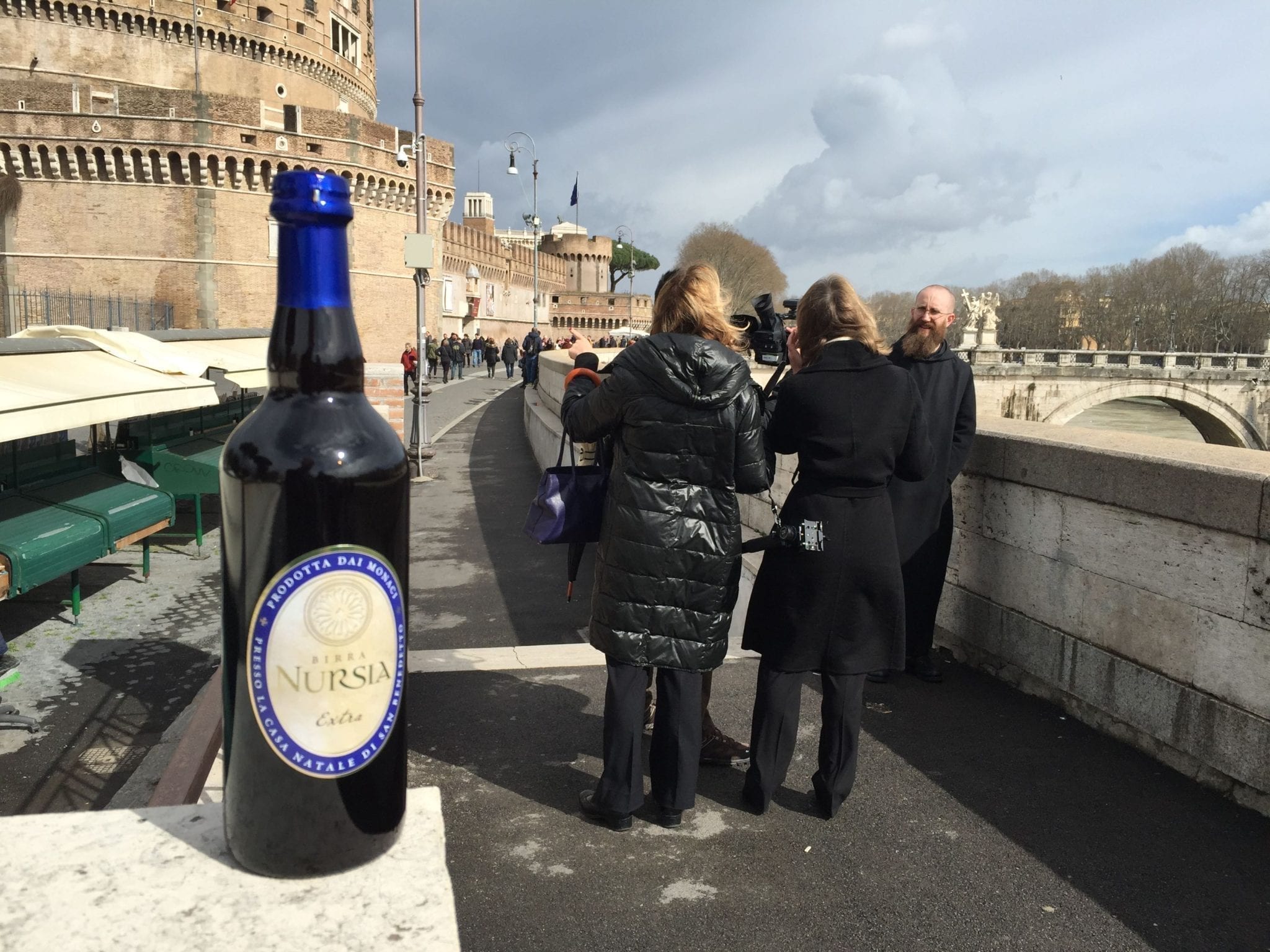 13 Apr Nursia in the News

In addition to the story below, the Brewmonks were recently featured on FOX News. Watch the story here!

ROME— Most people probably know that the Catholic Church gave Western civilization the modern university system, or that the Vatican’s collection of art represents the first real “museum”. What may be less familiar, however, is that Catholicism has also been a pacesetter on another critically important cultural front: Beer.

Catholic monks have been brewing beer for over 1,500 years, and they’re as active today as ever.

Such is the case with the Monks of Norcia at the monastery of St. Benedict, a thirteenth century cloister built over St. Benedict’s birthplace in the Italian city of Norcia, 100 miles from Rome. The monastery had been abandoned for almost two centuries when a determined group of Benedictines reopened it during the Great Jubilee Year of 2000.

Following their founder’s rule of Ora et Labora (Prayer and Work), and trying to fulfill his directive that monks should earn their keep and donate to the poor by the work of their own hands, in 2012 the monks of Norcia began brewing their own line of beer.

Until late January of this year, their widely sought-after ale was only available for purchase in Italy (and, of course, the Vatican’s own grocery store.)

As it happens, however, 12 of the 18 monks who now live in St. Benedict’s monastery come from the United States, and so, four years after they opened the brewery, the Monks of Norcia are now also shipping bottles of their blond and dark beers to America.

Pre-sale orders began being taken on Jan. 22 but shipping didn’t begin until March 1, with the aim being to have the beer delivered to America so it could be enjoyed over Easter.

The Norcia brewery builds on a proud Benedictine tradition. Historically speaking, monasteries around the world have revolutionized and perfected the beer-making process.

The practice goes back to the early sixth century, when Benedict of Norcia, today the patron of Europe and of students, wrote a template for monastic life called now known as “The Rule of St. Benedict.”

Composed of seventy-three short chapters on how to live a Christ-centered life as well as best practices to run a monastery, it was so influential that it gained his author the title of founder of Western monasticism.

Amid advice on humility, obedience, and silence, there’s a chapter dedicated to the reception of guests, outlining the obligation to show hospitality to travelers and pilgrims. Since in medieval times beer was safer to drink than water contaminated by sewage, it was often served to visitors.

Known as “liquid bread,” beer also helped the monks through periods of fasting in Lent and Advent.

But for these monks in Norcia, beer is not just a way to sustain their activities or a simple welcoming gesture.

Fr. Benedict Nivakoff, who grew up in New Canaan, Connecticut, is the director of the brewery, and he told Crux that there’s also a “supernatural” element to their work.

“People see that for us it’s not just a job,” he said Sunday. “Our job is to do something which, by the standards of the secular world, is pretty useless: to pray.”

“There’s a comparison with beer, because in a sense, [beer] is useless, it’s not something that you have to have to survive,” he said. “But it’s something you can enjoy and it makes life better, like God.”

The idea to open a brewery came from another American, Brother Francis Davoren, who today is the head “brew-monk.”

Speaking to Crux, the Dallas native confessed to having been a “beer-geek” in his pre-monastic life, with a particular appreciation of beers produced by religious orders around the world, some of which are considered among the best ales in the industry.

Davoren suggested a book to his prior, “Brew like a monk”, and after researching the craft and with the help of a monastery from Belgium, the idea became reality. It’s designed to fulfill a two-fold goal of self-sufficiency and evangelization, because, Davoren said, beer-making is a great ice-breaker, and conversation often moves from ale to faith.

The more than 13,000 gallons of beer the monks produce per year are brewed during days in the monastery that begin at 4 a.m., and which are punctuated with calls to prayer every 90 minutes.

On brewing days, which number four to six a month, the monks who take care of the production “have to put brewing in between prayer, and prayer in between brewing,” Nivakoff said.

“We’re seeking God above all,” Davoren added. “The focus of our day is God. We work to support ourselves, but also for the glory of God: The beer helps support the monastery, so that the monastery can support his work in the world.”

As part of the launch of their American on-line store, they created the “Brew Monks Club,” offering fans the possibility to become friends with the monastery and to guarantee shipping since it’s done on a first-come, first-served basis.

Those who sign up also receive reflections from Davoren and insights about beer production.